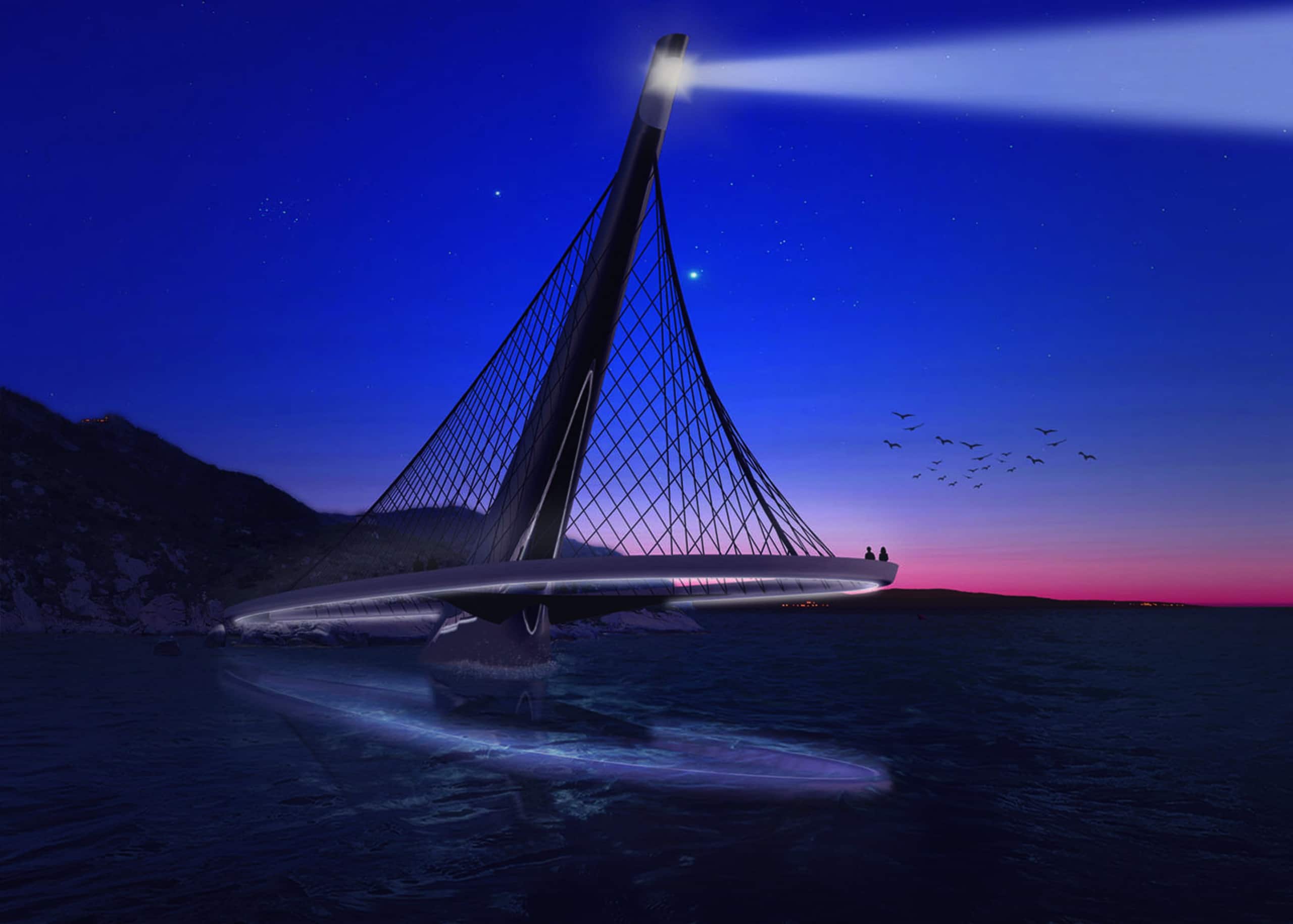 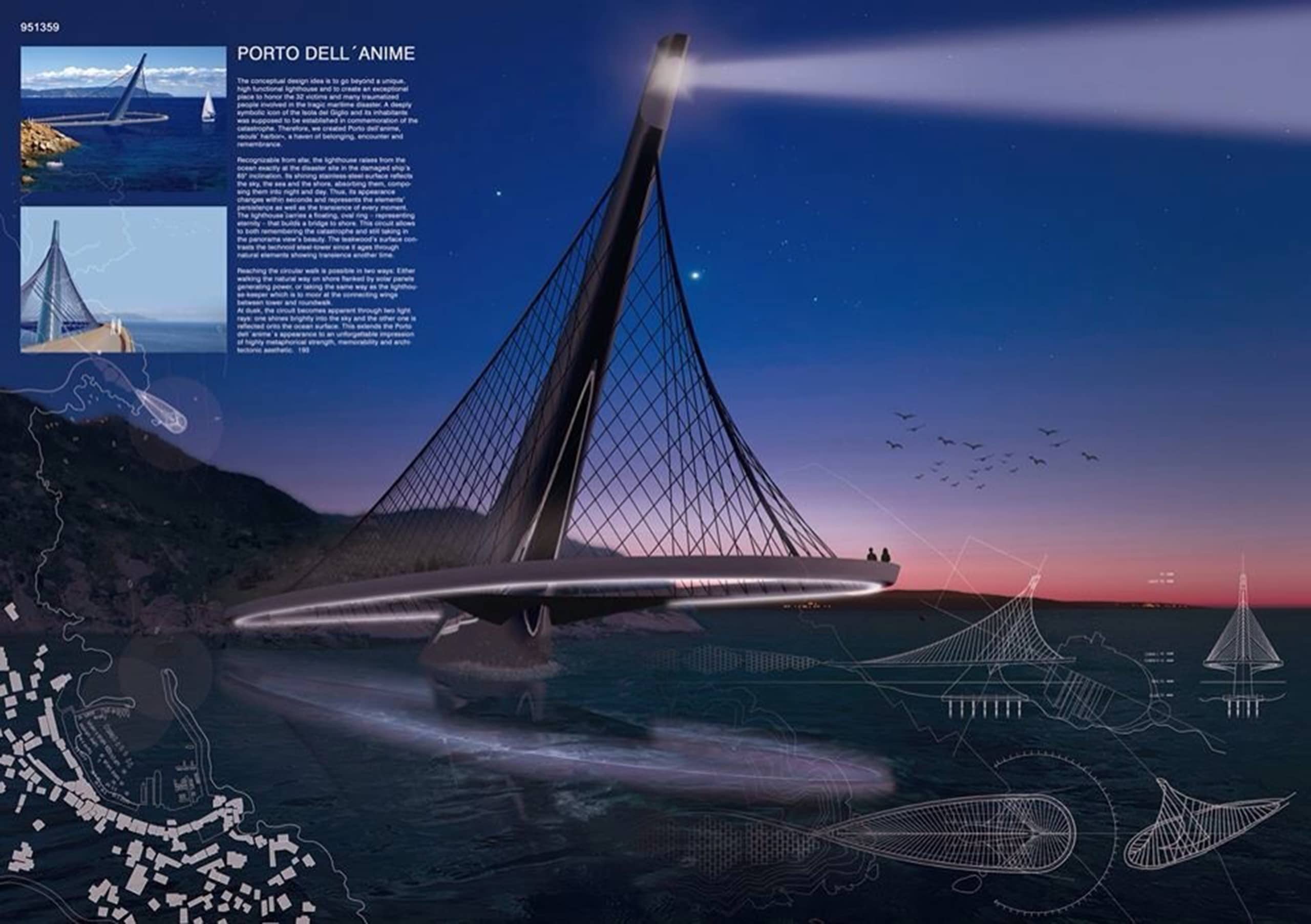 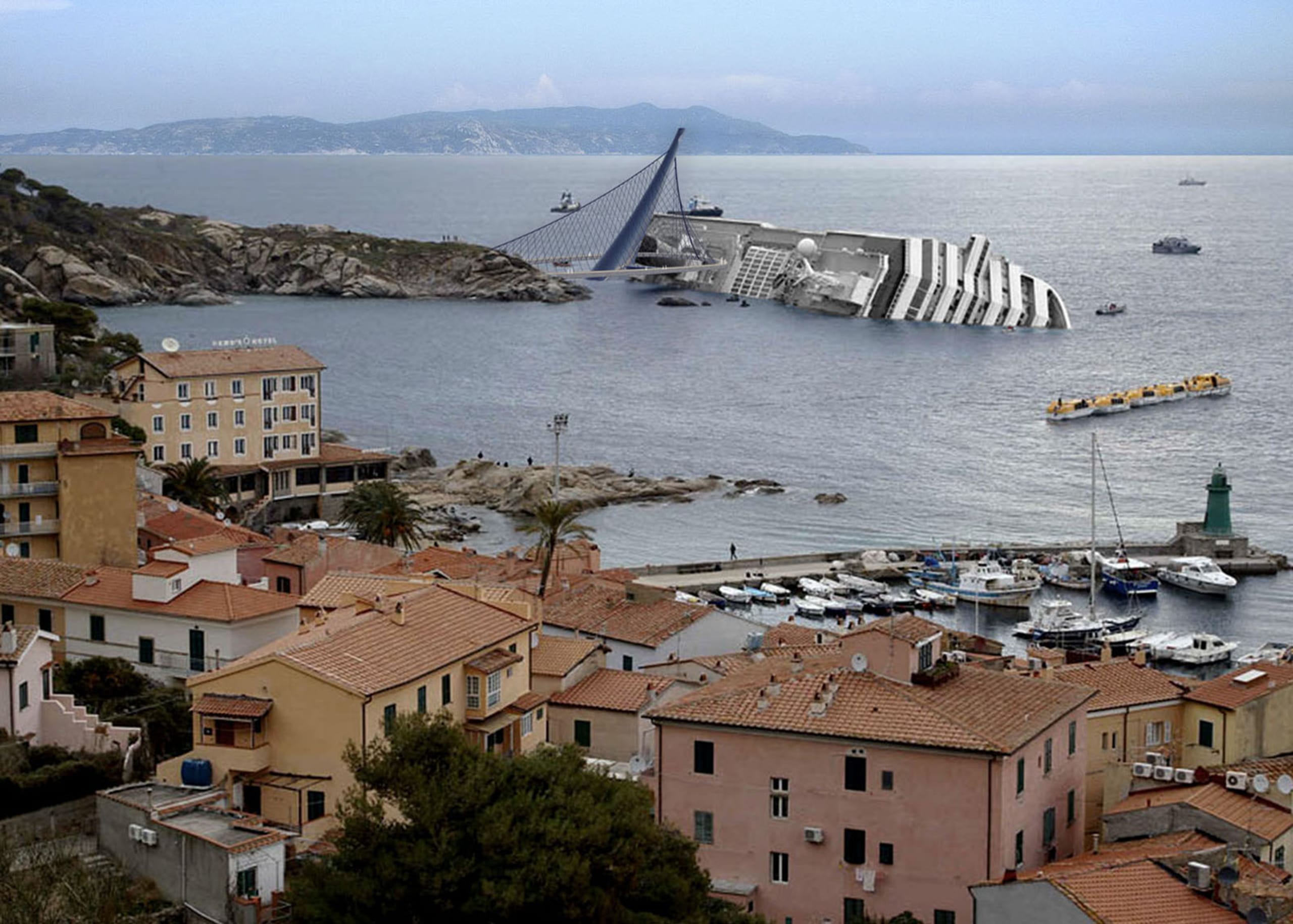 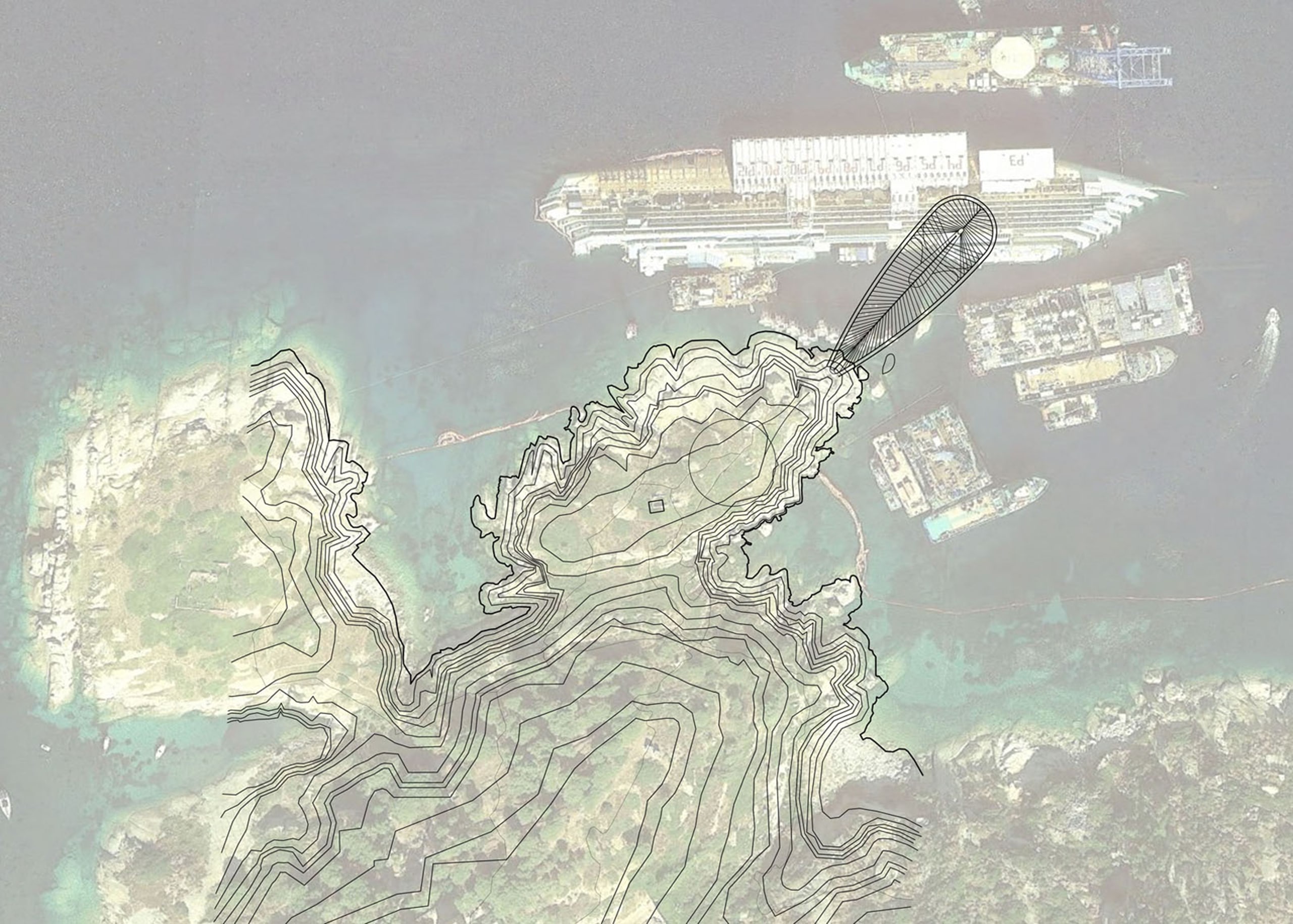 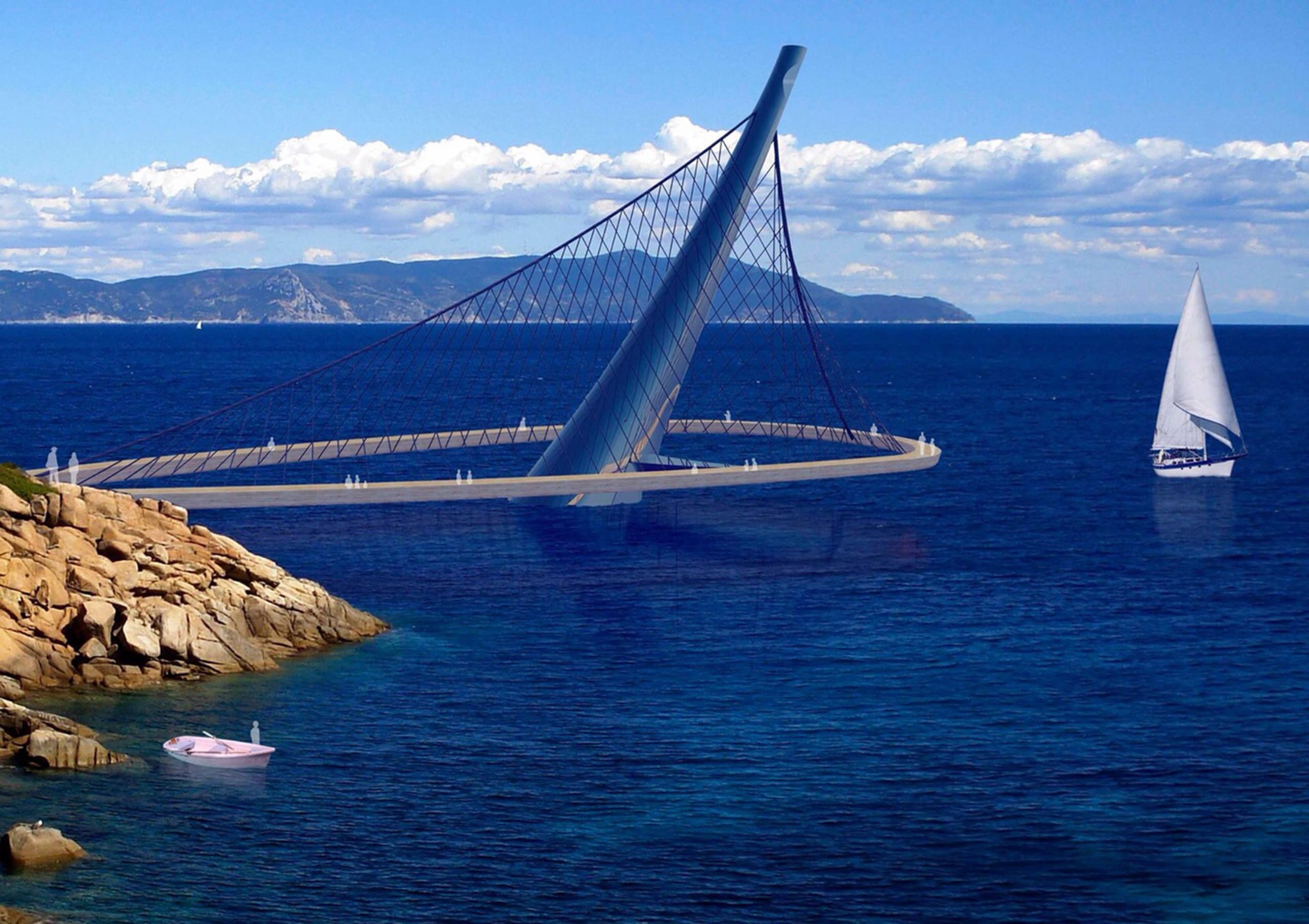 The conceptual design idea was to go beyond a unique, high functional and architectonic aesthetic lighthouse and to develop an exceptional place to honour the 32 victims, their loved ones and the many traumatized people who were involved in the maritime disaster. Thus, a »genius loci« was supposed to be created with an unforgettable atmosphere of contemplativeness, respect and emotions.
Furthermore, a deeply symbolic icon of the Isola Del Giglio and their inhabitants was established in commemoration of the catastrophe. Thus, we developed the »PORTO DELL’ANIME«, the »souls’ harbour«, a haven of belonging, encounter and remembrance.
Already recognizable from afar, the lighthouse raises from the ocean exactly at the disaster site of the damaged Costa Concordia.
Although its form consciously follows the classical shape of its archetype, an independent, rounded lighthouse, it still depicts the ship wrack’s slanting position with its own inclination of exactly 65° degrees. Its homogenous shining stainless-steel-surface reflects the sky, the sea and the shore, absorbing them, composing them into night and day. Thus, its appearance changes within seconds and represents the elements’ persistence as well as the transience of every moment.
Using filigree steel ropes, the lighthouse, with its oval cross section, carries an oval ring – representing eternity – that seems to float above the sea, but at the same time builds a bridge to shore. This creates an axial connection between the disaster site and headland.
Step by step, this circuit allows both remembering the catastrophe contemplatively and still taking in the panorama view’s unique beauty. Its surface is fully cased in teakwood and therefore appears as monolithic ring. This wood contrasts the technoid impression of the steel tower with its tethers for it greys due to natural elements. It shows sign of weathering and aging which also represents the transience of all natural. The strings picture a constantly changing line – playing upon the round walk, lighthouse and ocean, contributing to the »PORTO DELL’ANIME’s « exceptional appearance in an enthralling way.
Reaching the circular walk is possible in two ways: One can either take the natural way on shore at the oval’s cusp which is a hiking trail flanked by solar panels generating power for the lighthouse’s operating. This walk from natural terrain towards the circuit of the tower raising from the ocean, from nature to culture, already puts visitors in an extraordinary atmosphere and expectation.
The other way is to moor one’s boat at the two connection wings between tower and round walk which gives the visitor a completely different, a vertical perspective of the site. This way is also intended to be used by the lighthouse keeper in order to get to his cabin which is located on the entrance level of the lighthouse.
At dusk, the circuit becomes apparent through two light rays: one brightly shining from the oval’s inside into the sky, one reflected onto the ocean surface. This extends the »PORTO DELL’ ANIME’ « overall appearance to an unforgettable impression of highly metaphorical strength, memorability and architectonical aesthetic.