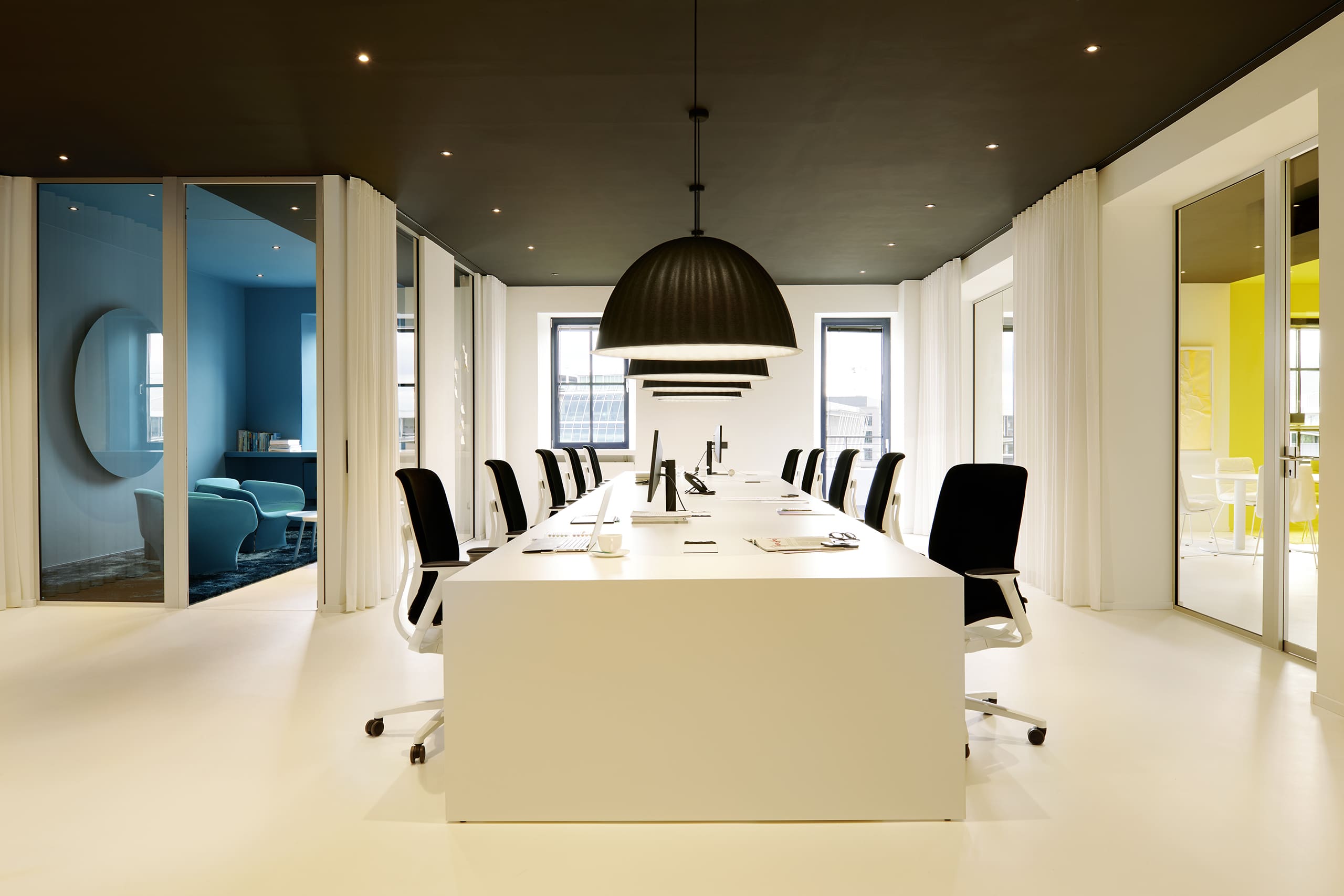 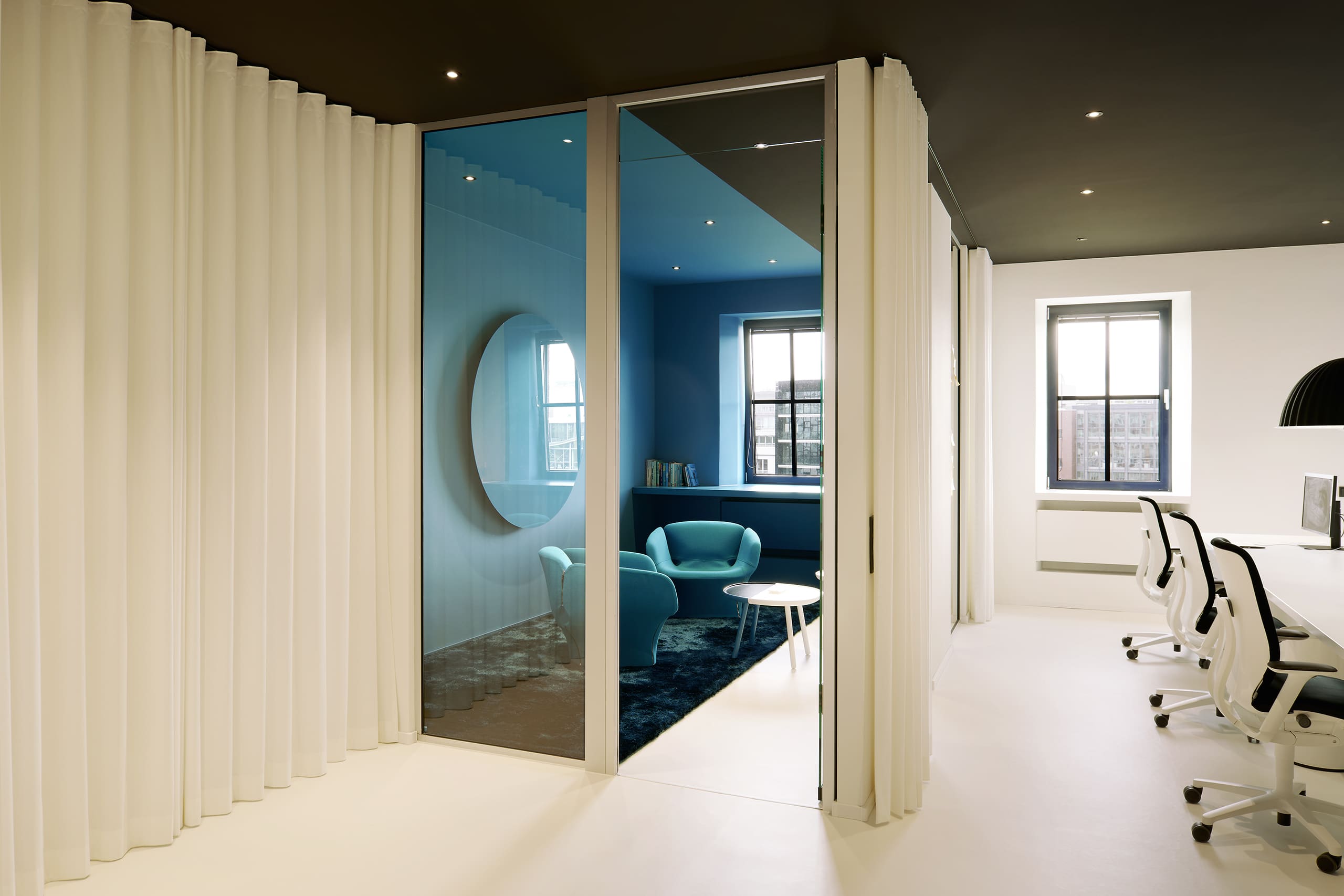 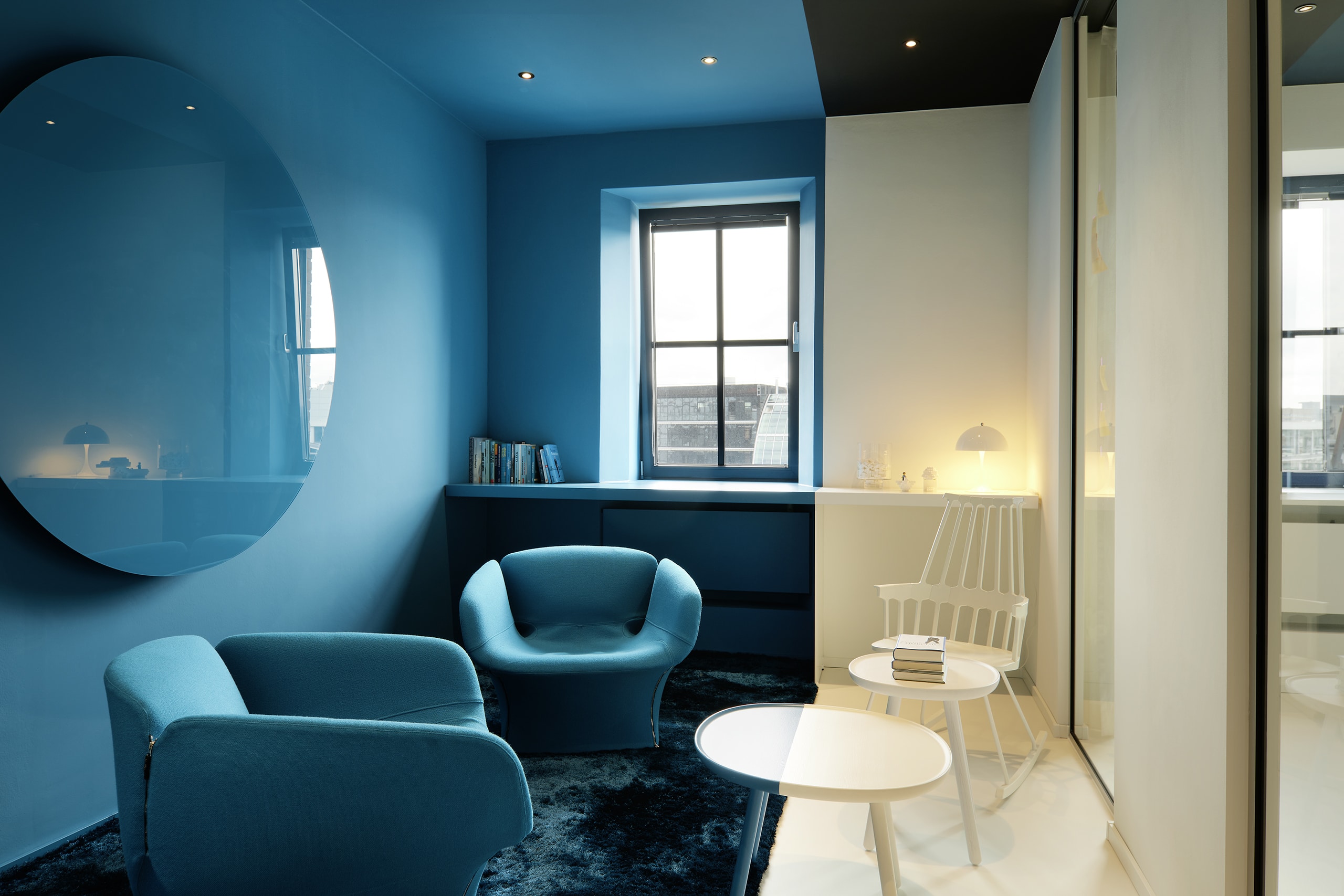 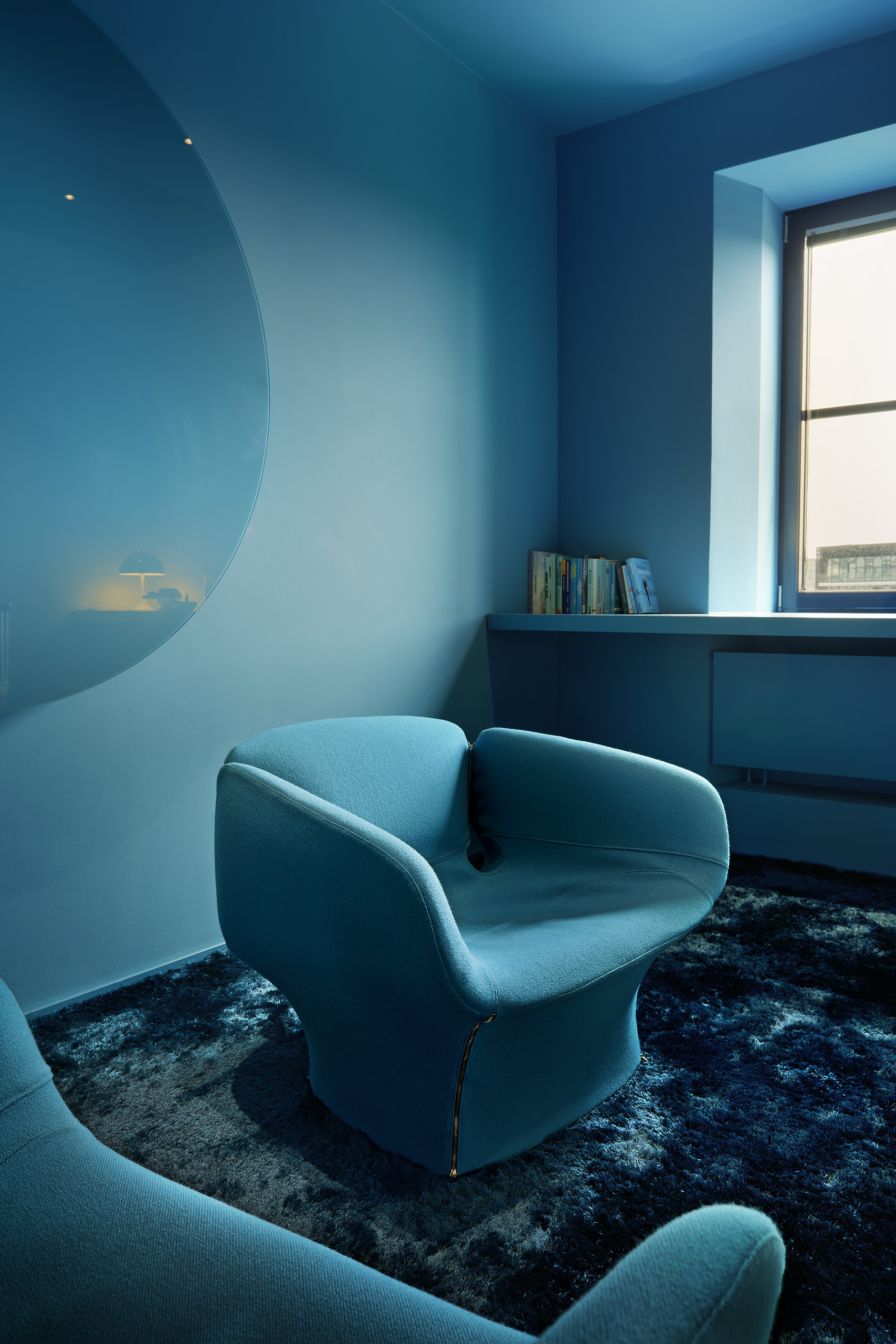 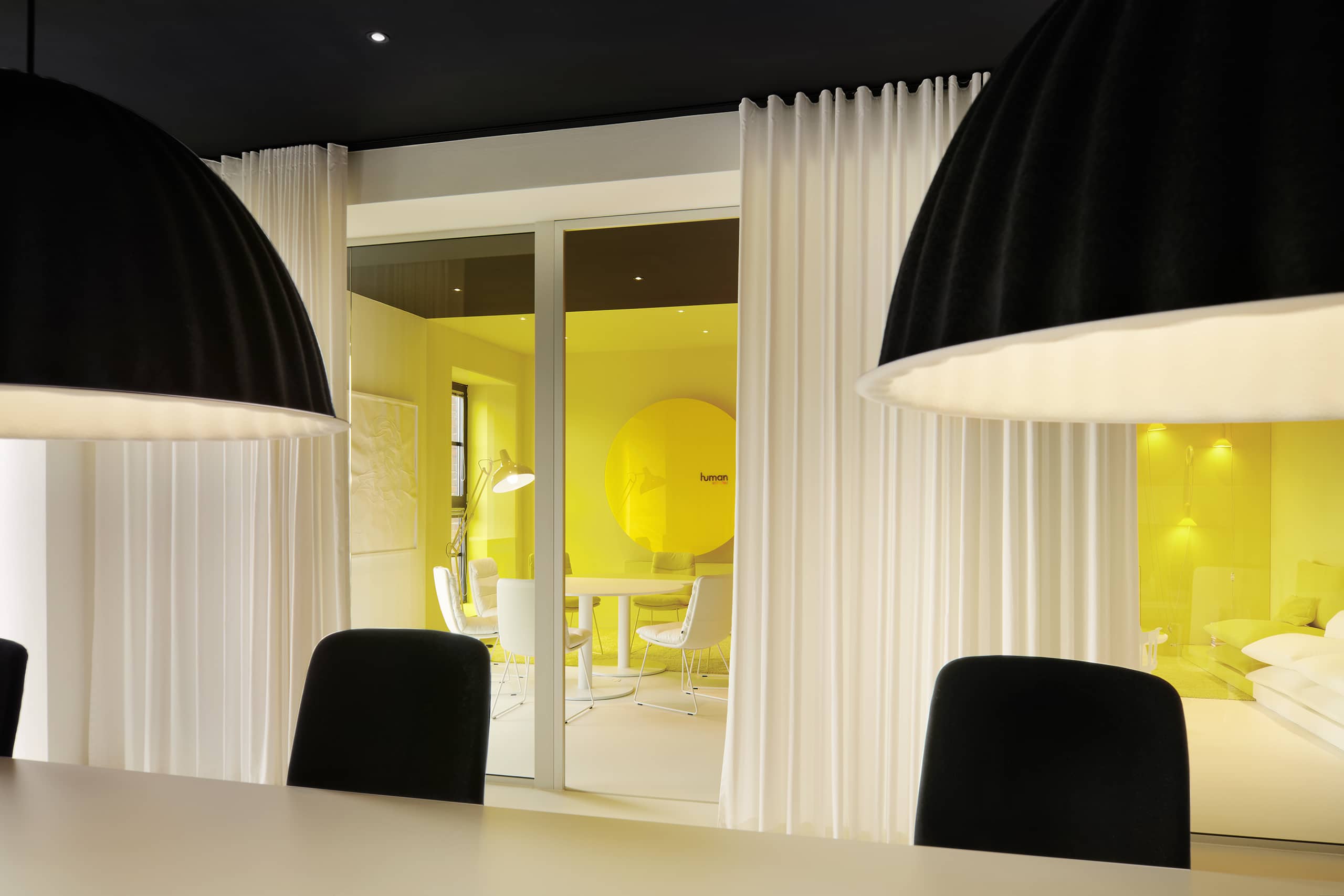 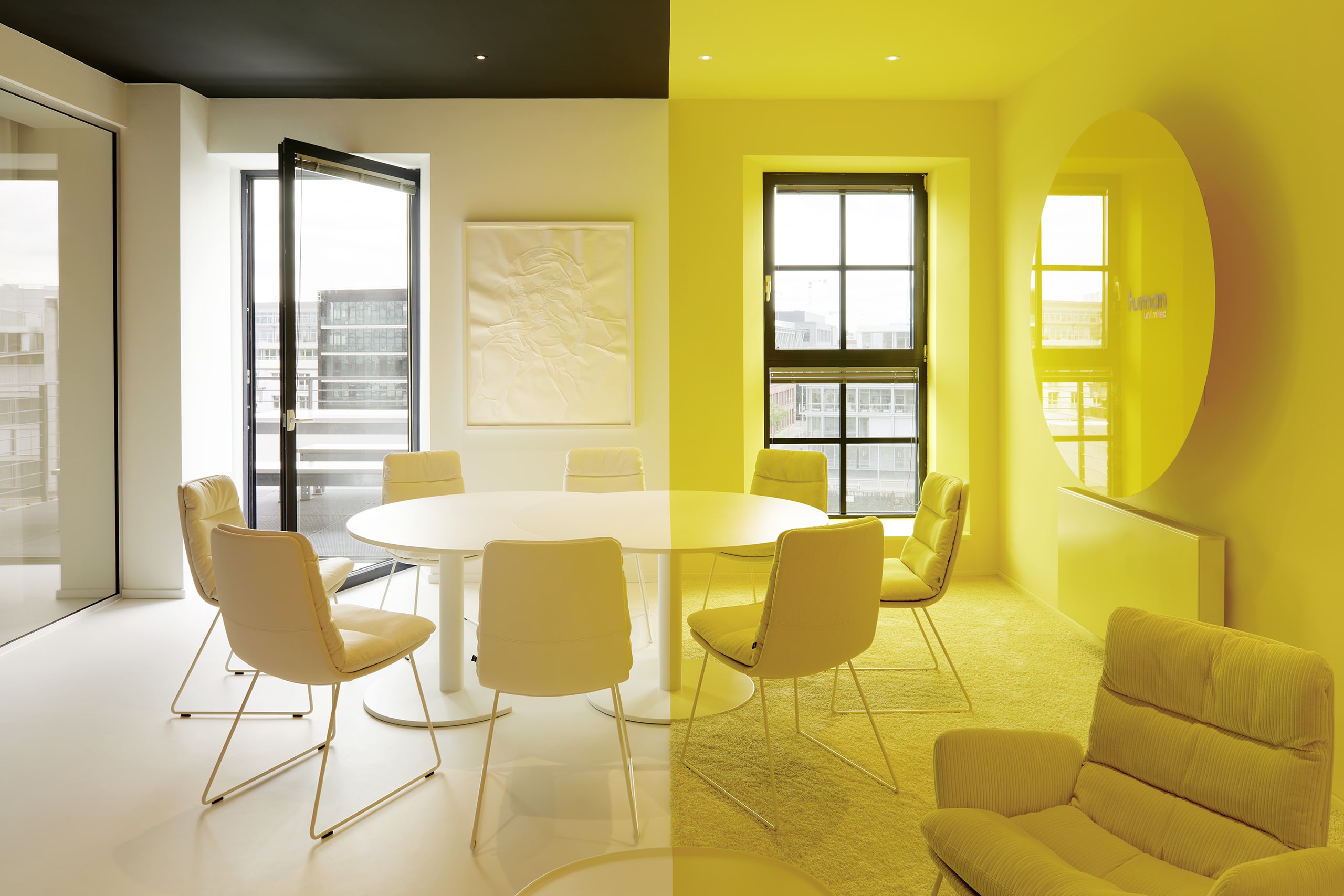 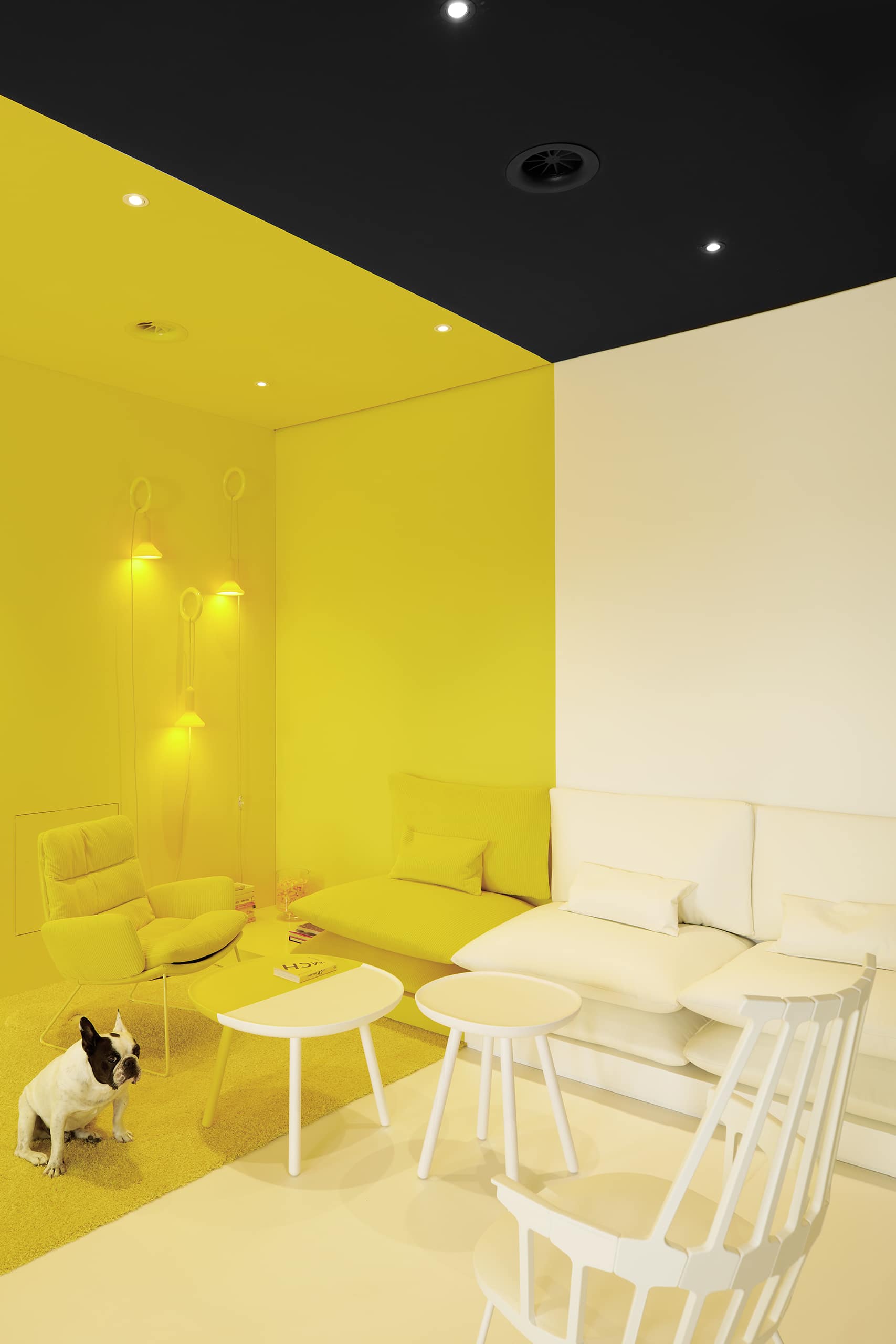 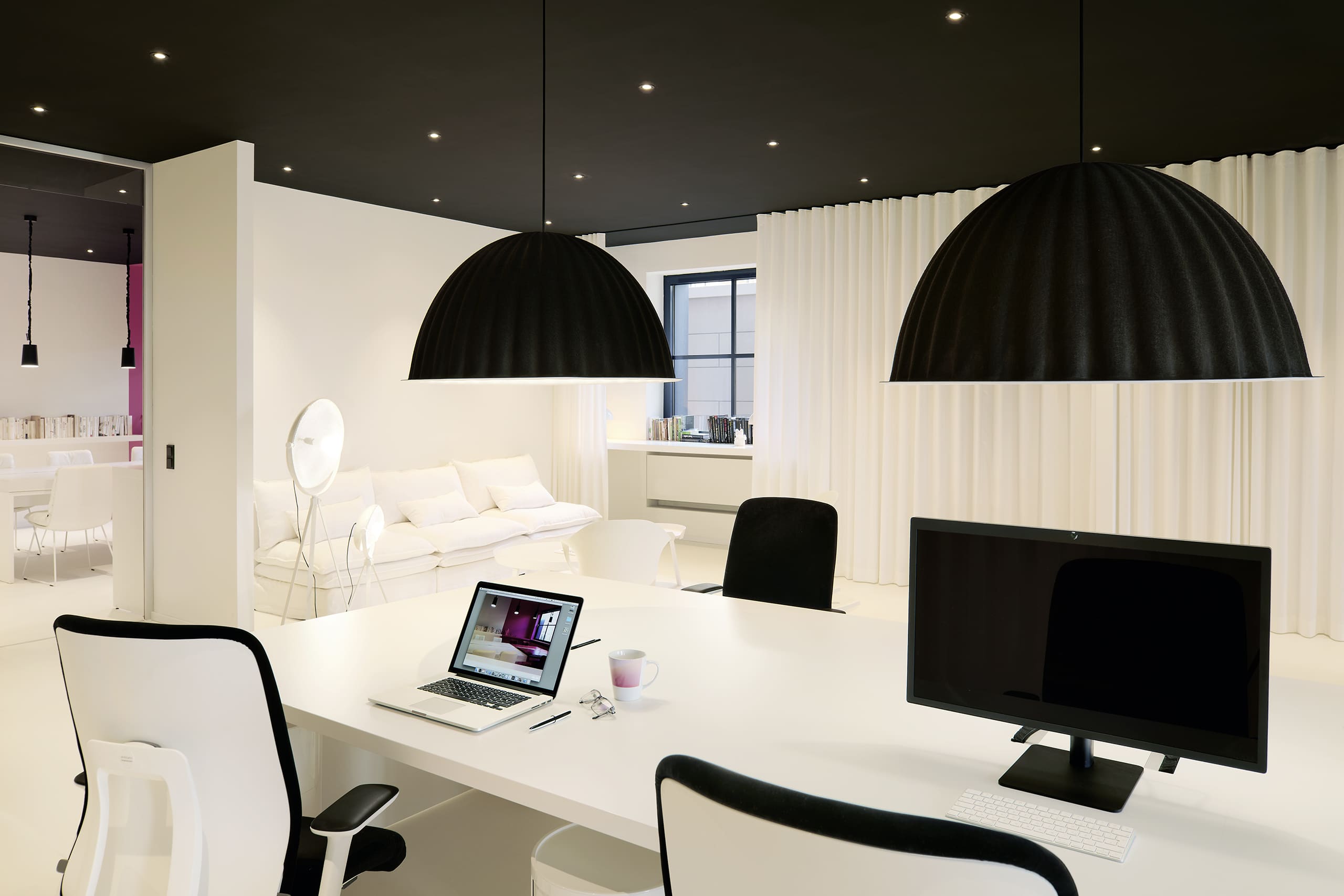 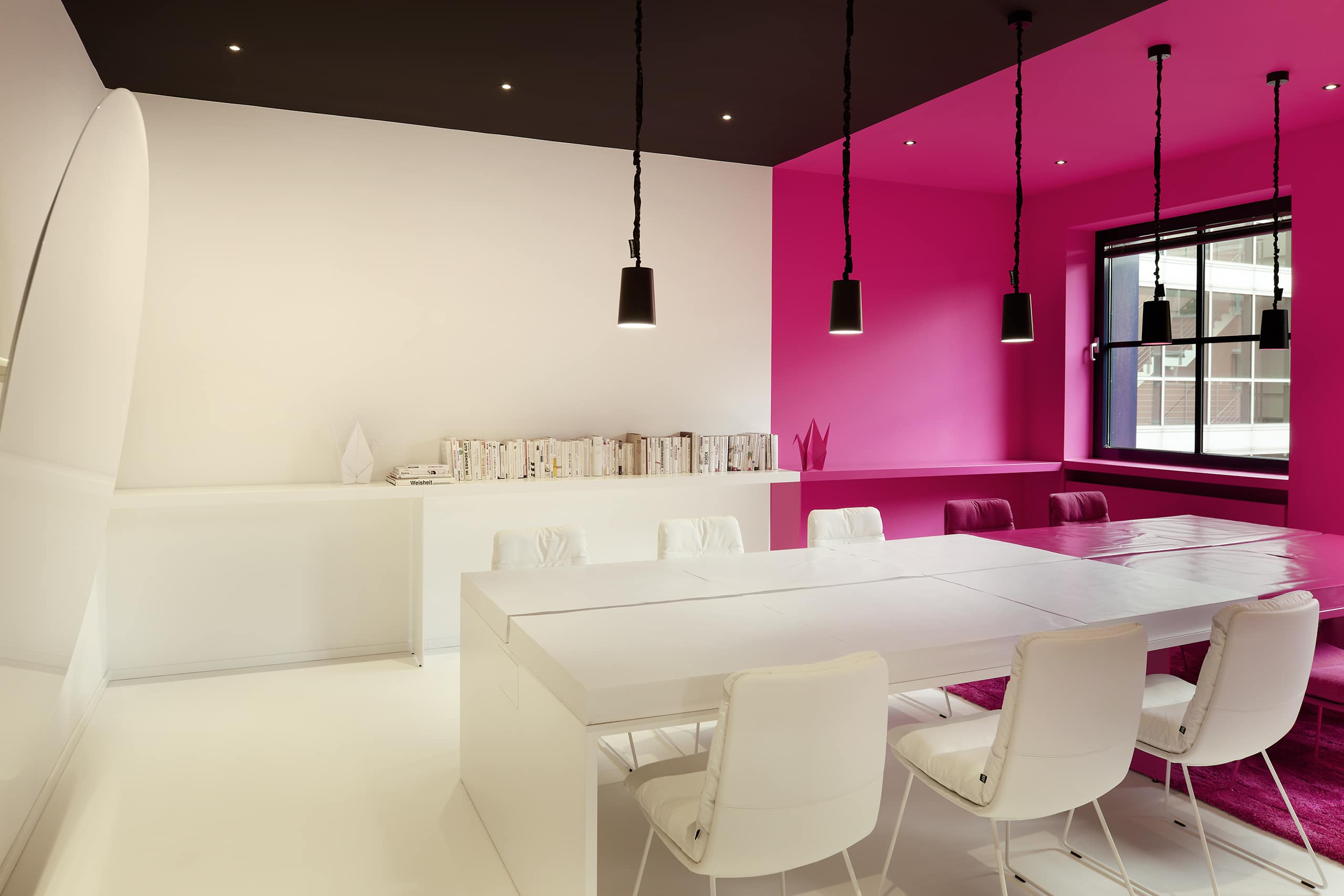 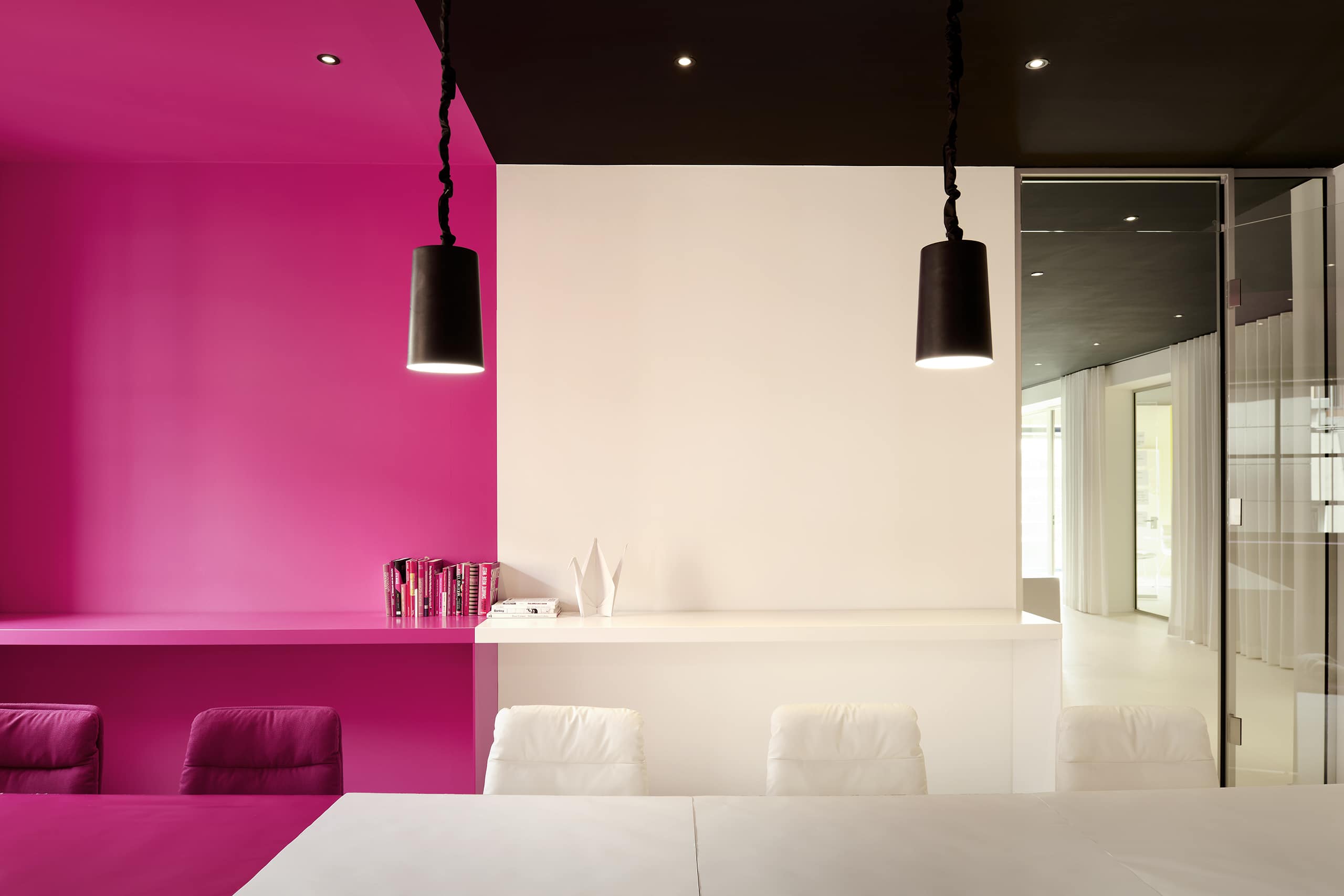 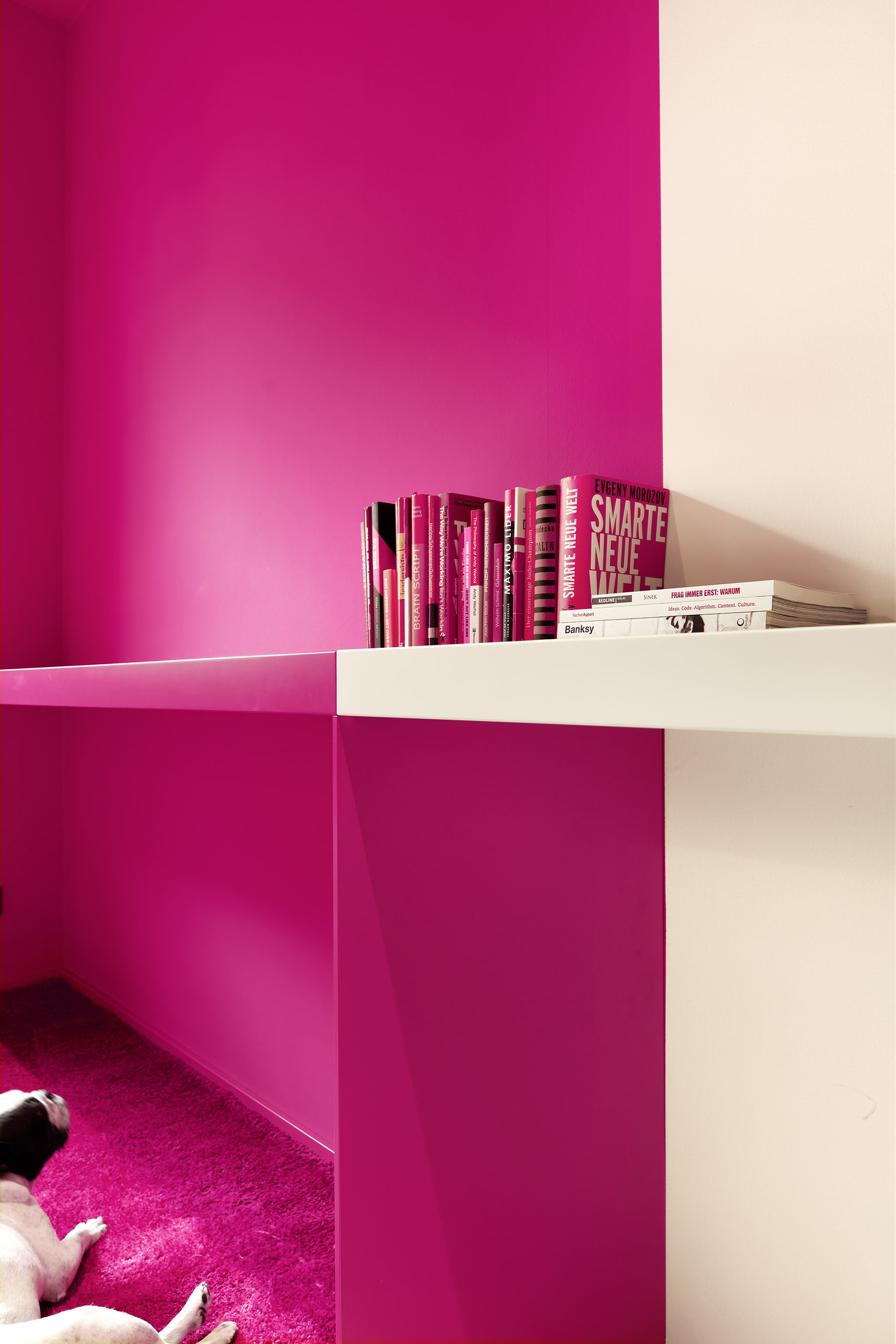 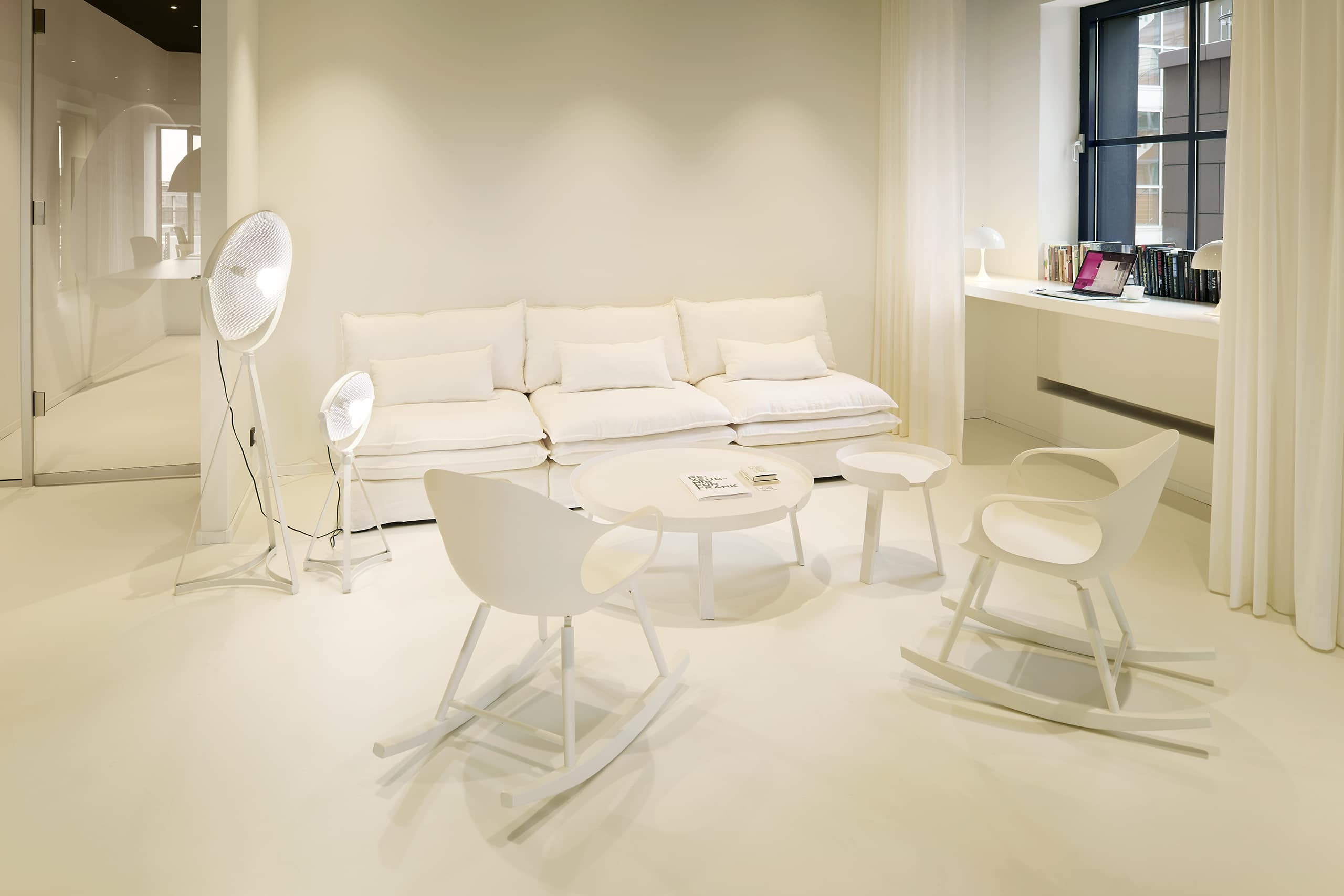 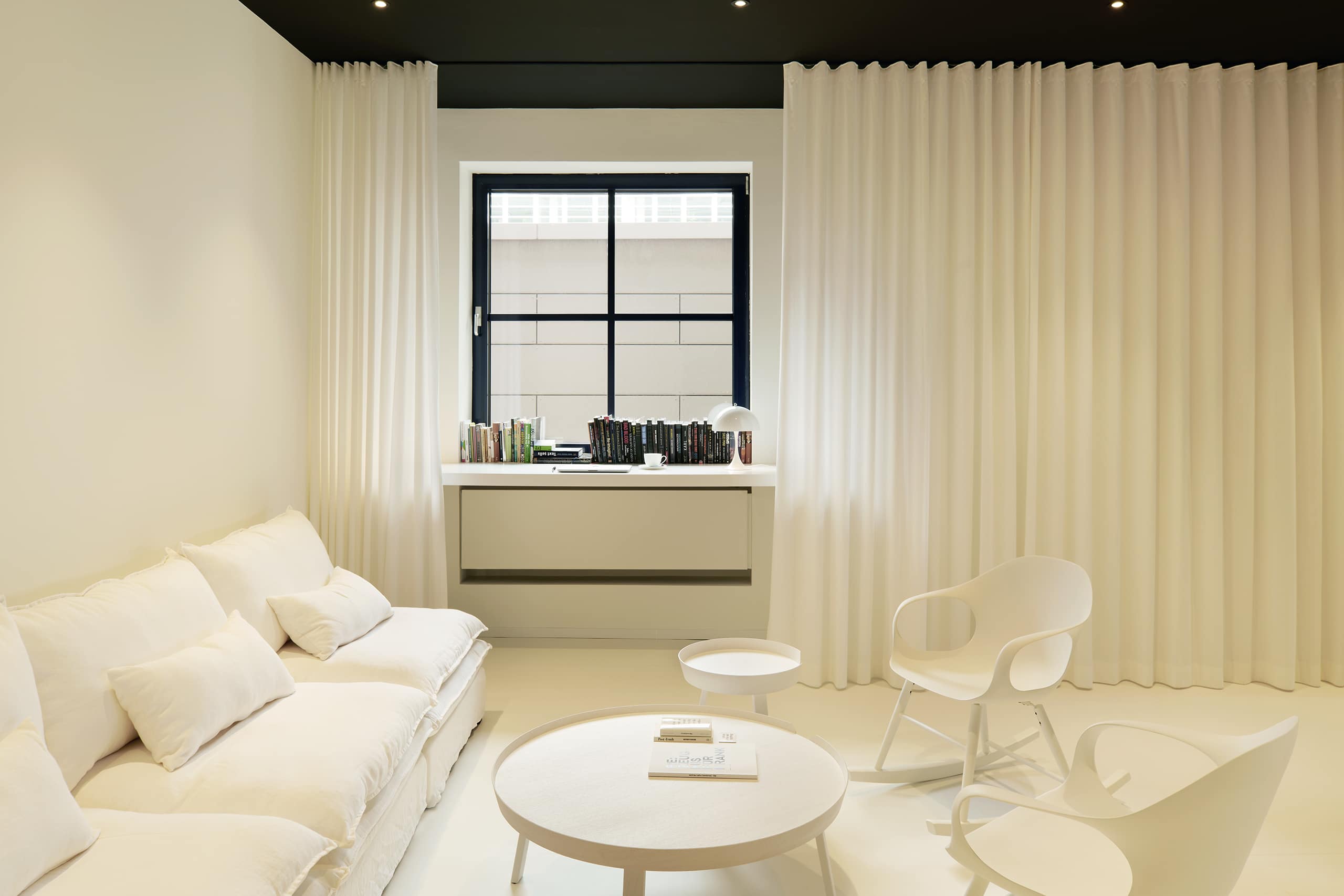 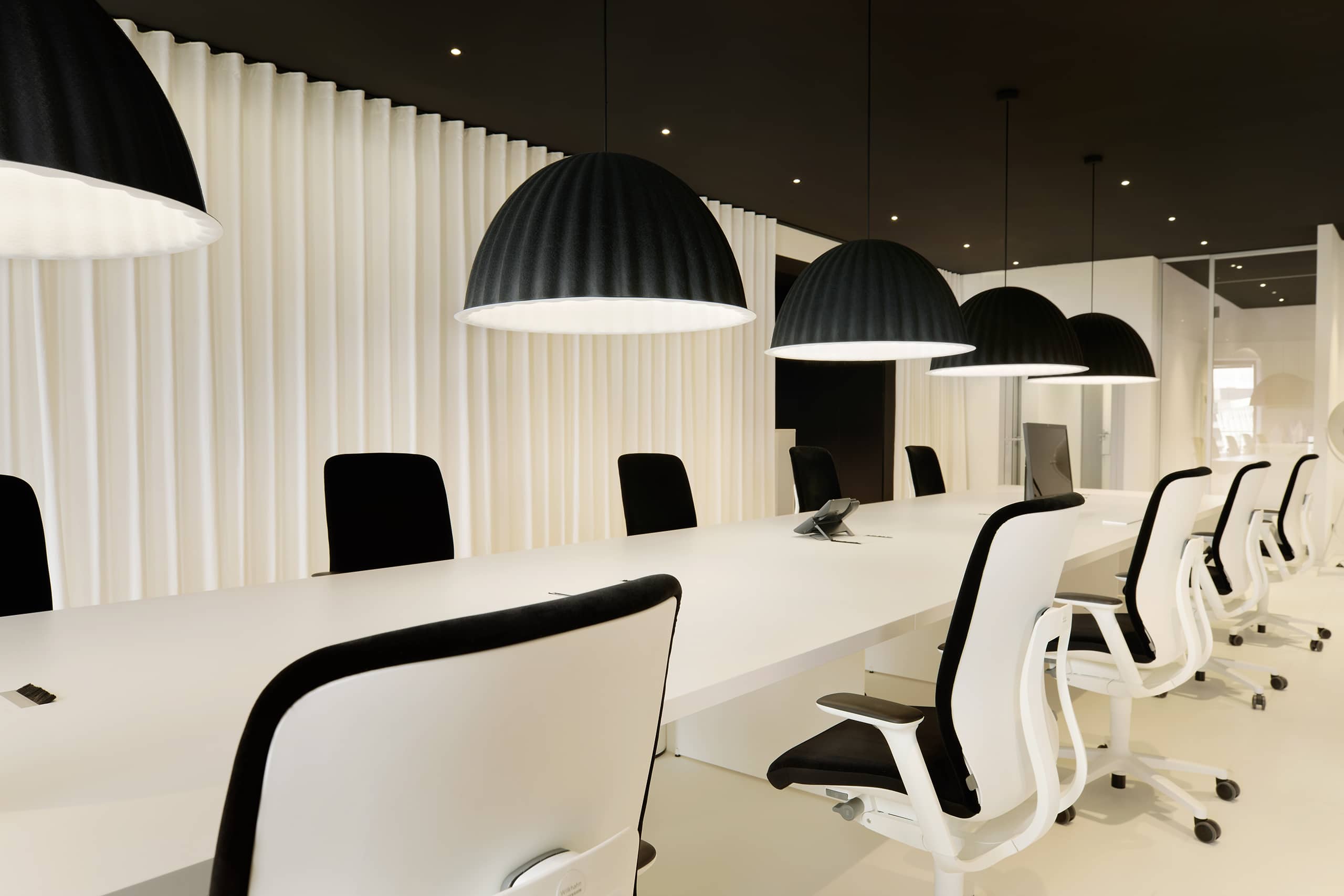 The young “purpose company” human unlimited sees itself as the creative answer to classic management consultancies. “The purpose of this company is to give companies meaning, because nothing is more effective. God is a creative. Not a controller. Creation means bringing something new of value into our world. That is the idea,” says Frank Dopheide, founder of hu.

With this in mind, the task was to design 200 square metres for human unlimited in Düsseldorf’s Medienhafen in a way that was both strong in identity and meaningful for meetings and retreats.
For this purpose, an unusual colour concept with a high recall value was created, based on a central design idea, the corporate design of human unlimited:
The word “human” appears graphically in striking black on white. This clear statement is complemented by the word “unlimited”, which, like a chameleon, can take on all the colours of the colour wheel according to the (corporate design colour tone of the) respective client (of human).
For human, however, the three primary colours cyan, magenta and yellow from the CMYK colour space stand for purpose, commitment and leadership. These were therefore used to create sharply defined, completely monochrome zones in the respective communication spaces. In this way, the moods of the rooms and the people in them are directly influenced in a powerful colour-psychological way.
A homogeneous floor, white as snow, merges smoothly into walls that are also white.
Light, acoustically absorbent white curtains flank the central, partly glazed walls and control views in and out.
Together with a deep black ceiling, this creates a calm background and counters the expected image of a dark floor with a light ceiling.
Individual white interior fittings seem to grow out of the white floor, black lights swing from the same-coloured ceiling.

The custom-made tables and sideboards show a clear, reduced language of form.
Surfaces dissolve into lines when the perspective changes.
Large-format, round, magnetic glass panels, freely positionable via articulated arms, serve as idea boards and partly as projection surfaces.
Unexpected details such as full-surface paper blocks as table surfaces, strong haptically and visually perceptible material changes and an idiosyncratic composition of armchairs, chairs and side tables reinforce the idea of “bringing something new of value into our world”.